Cover Art For My Work-In-Progress

I'm running full steam ahead with my current novel. It's going so well it's almost uncanny. I had the general idea for it over a year ago and started something, but it petered out about a quarter through - I'd just started it totally wrong. A few months back I had a better idea of what to do with it and couldn't wait to get started. So now I've managed 48.000 words since the beginning of March and am still going strong. Considering that I work full-time and have my studies (more on that in the next post), plus spring is keeping me outside a lot, I'm really proud of myself. This story is so much fun with every scene. Sure, it's still a very rough first draft because I'm burning through it so fast, but I'll fix it when it's finished. The fact that I now use Scrivener makes not editing everything right away even easier, because it's a breeze to jump around in the manuscript and find certain scenes, or change them around or... it's just easier. Totally worth its price. Period.


Anyway, I always like to do mock-ups of covers for the stuff I'm writing. I get some pics off Google Images and create something in MS Power Point. The first one I did for this story, the first version about a year ago, looked like this: 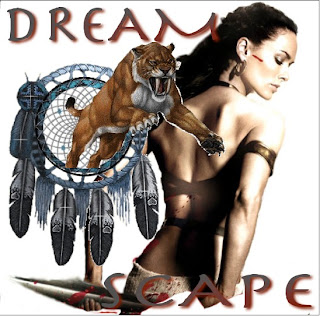 Not too shabby, all things considered - Power Point isn't exactly an image editing program. But of course the pics are copyrighted and I didn't buy them or the rights to them, so on the off-chance that I decide to publish this novel (or any of my others) through, let's say, KDP, I couldn't use something like this. So a few days ago, I finally decided to have some fun doing this the right way. I opened an account at Shutterstock and bought the five-pic download option. I downloaded two pics that fit (I found many more, but these two just screamed I'm The One for this!!!!). Then I bought and downloaded Pixelmator, the image editing software for Macs. I thought about getting Adobe Photoshop, but that's very expensive and I've never used such software, so I decided to start out 'slow'.

Incredibly, not even two hours, lots of fun and only a few cuss words later, I had this: 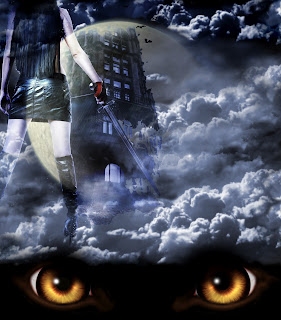 I realize this isn't perfect, either, but it's miles closer to something usable, and lightyears closer to the tone and feel of the story. So for now, that's going to be the cover of my work-in-progress.

Looks like May is a big month for new urban fantasy releases. Tor.com has compiled a list of twenty-two new titles, many of them young adult – 45% in fact.

I’m definitely going to check out Cassie Alexander’s Nightshifted. That sounds like a hoot and a half. It especially intrigues me because it has a bit of a different premise for a change. Instead of the perfectly trained kick-ass fighter heroine, Edie Spence is a nurse who works in a secret paranormal hospital ward. Ha. Definitely sounds fresh to me. Talking about new releases, I gulped Kevin Hearne’s new Iron Druid Chronicles release down like tiramisu (= best dessert in the universe). I don’t often actually get adrenaline-jitters about new releases anymore, but Atticus O’Sullivan and his get definitely give me hot flashes of anticipation. And his fourth adventure, Tricked, was just as wild, funny and satisfying a ride as the three before that. Awe. Some.

Another book I discovered for myself two weeks ago that knocked my mind and blew my socks off was Angelfall by Susan Ee. That is one roller-coaster ride of action and angst in a dystopian world ravaged by an angel-apocalypse. It has a five-star rating at Amazon from 366 out of 441 reviews, and it deserves every one of them. Now I’m not usually big on angel stories, but my gut instinct made me download this one on to my kindle, and I’m glad I did. I still catch myself thinking about this story and wondering how it’s going to go on, hoping that the next book isn’t too far down the road anymore. The only crux is, that there’s no release date set for the sequel yet…

On the book-to-movie front, I naturally had to see how The Hunger Games had been adapted to the screen. I read the book shortly after it was released in 2008, so I remembered the basics but wasn’t constantly comparing book and movie, which probably made it more enjoyable than it would have been had I read the book only recently – not that the movie differs greatly. IMO, it’s actually an amazing adaptation, staying very true to the plot, the feel, the characters, the look (as I imagined it). I especially enjoyed the glimpses you get of Gale as he watches (or doesn’t watch) the Games; in the book, because of Katniss’ first-person POV, you don’t see him once she leaves her district. Reading the sequels, you of course realize what he must have been going through, but seeing it on screen was nice nevertheless.

Review of Warrior Wisewoman 3 And An Apology

I don't usually post reviews here, but I know one of the authors of this amazing anthology, who asked me to read and review it for Amazon. Because I was very pleasantly surprised by the stories – usually not being much of an anthology-reader - I’ve decided to post my review here, as well.
Even as an as-yet unpublished writer, I know how important it is to get the word out about your book, so I hope this post will be a small, sticky flake in the growing snowball of these authors’ promotion.
I also sincerely apologize for taking so long in writing this review (I promised to do so over a year ago in return for a promptly-delivered favor). When I got the book, I read through it in a week during my lunch breaks. I should have taken notes on each story right away (since I wanted to say something in the review about each and every story) but enjoyed them so much that I blazed through them and kept thinking ‘I’ll jot down the notes later’. Famous last words… because it turned out it wasn’t as easy as I’d thought to write down notes without reading the stories again, and then life, other books and my own stuff got in the way – that’s no excuse, just an explanation.
I really am very sorry.
In the spirit of ‘better late than never’, I finally got down to rereading the anthology two weeks ago. I enjoyed it as much as I did on the first read and this time I took notes right away.
So, without further ado, here’s the long-time-coming review of


There is a lot of talent and many amazing stories amassed in this one volume. I especially enjoyed the humanity to be found in each and every protagonist. Even though the stories are set in science fiction worlds or circumstances, the choices and decisions these women face were very real and often had me thinking about how I would handle things if I were in their situations.
I enjoyed every one of these stories, though I do have several favorites:
“Tourist Trap” by Aimee C. Amodio
“The Race” by Jennifer R. Povey
“Baby, Be Mine” by Susan Tsui
“To the Altar” by Therese Arkenberg
“The Truth one Sees” by Kathy Hurley
“Dark Mirrors” by John Walters
Below are the impressions I took away from each story. Some are fairly descriptive, others are just my feelings on the tale.
„Driving X“ by Gwndolyn Clare
A kind of scarily realistic picture of a future in a scenario in which men are slowly going extinct. Nice surprise twist towards the end.
“Heart of Stone” by Joel Richards
A tad confusing but with an intriguing surprise ending.
“Tourist Trap” by Aimee C. Amodio
This story touches the heart like the ‘seasong’ that could be your doom. An enchanting love story.
“Dinner for One” by Bruce Golden
Quite depressing; even at the end the world seems rather hopeless and full of despair. Definitely not a light read, but incredibly moving.
“The Race” by Jennifer R. Povey
The key sentence (yes, there’s one sentence on which this whole story hangs and builds) had me in goose bumps and close to tears. Amazing!
“The Envoy” by Al Onia
Slow to start but heart-breaking finish with a great sacrifice.
“Bearer of Burdens” by Melissa Mead
This is a good story in itself. I’m just not sure what the author was going for, probably because it goes against every belief and value I have. A world in which the worries and hurts of everybody is laid on one person to bear is horrifying to me.
Definitely food for thought!
“What lies dormant” by Swapma Kishore
A post-apocalyptic story set in India – a nice change. It was rather confusing at first, but made sense in the end. The large amount of time that passed in such a short story threw me every now and again. Nice, hopeful ending, though.
“Katyusha’s First Time Out” by Susanne Martin
A story about mothers and daughters, the friction between parents and growing children, even in desperate times.
“Natural Law” by Alfred D. Byrd
One woman sacrifices a lot to help thousands of others - though in the end it felt more like a new chance rather than a sacrifice.
“Baby, Be Mine” by Susan Tsui
This story is very short, yet a lot of fun and well-written. Loved the voice, simple yet expressive. I would have enjoyed more backstory on her relationship and a bit more world building. It didn’t seem very science-fictiony to me – though I realize that wouldn’t be necessary for the story.
“Mayfly” by Gary Kloster
This story takes a look at what might happen if parts of humanity became immortal. Great suspense.
“To the Altar” by Therese Arkenberg
What a decision to have to make! I teared up reading this story.
“Sustain Nothing” by Paul Abbamondi
This story zipped by in moments, sporting a very relatable protagonist – I’d have gone nuts long before.
“The Truth one Sees” by Kathy Hurley
This story struck a personal chord with me: how do you convince people of a truth only you can see? Very moving.
“Mater Luna” by William Highsmith
A very intriguing premise: What would aliens 10.000 years from now find if we humans managed to nuke our planet? Could they identify with us in some way?
“A Pearl of Great Price” by Leslie Brown
Exciting. What if aliens saw us the way we see animals? As pets, objects of fun who endure much and can’t fight back. How would we fight back?
“Dark Mirrors” by John Walters
Again, goose bumps. Another alien invasion, but this time peace, not war, is The Answer – but we have to figure that out first.
Wow. Just… wow!
“A Bird in the Hand” by Douglas Smith
This story has a nice twist and a sad overtone – I wonder how it might continue with the Heroka.
Posted by Pia at 9:00 PM No comments:

Sometimes, all you need is twenty seconds of insane courage. Twenty seconds of embarrassing bravery. And I promise you, something great will come of it. -- Benjamin Mee in We Bought A Zoo

Confidence will give you the strength to doubt yourself. ~ Nathan Bransford

The act of putting pen to paper encourages pause for thought; this in turn makes us think more deeply about life, which helps us regain our equilibrium. ~ Norbet Platt

‘Whatever you can do, or dream you can, begin it; boldness has genius, power, and magic in it.’ ~Goethe